contributed by Member States to assist countries torn by conflict onto the path of peace and stability. Its

revealed how they can resolve conflict through peaceful means [1]. It was originally established in 1948 in

Israeli conflict) to address the crisis that plagued both regions, with both missions still continues to this day

[2]. Since then, it had expanded its range and area of operations. It had helped the UN to protect civilians,

disarm combatants that threat peace and stability, and oversee countless transitions of countries torn by war

to economic prosperity. It has over 100,000 soldiers, police force, civilian, and volunteers deployed in

regions where national intervention would not solve the problem or would make it worse, and its neutrality

had protected its personnel from attacks by either side of a conflict most of the time [1]. Along its long

and witness inhumane acts perpetrated by insurgents. Questions had been raised by the public on whether or

not the UN’s military force can actually solve international crisis and advocate human rights; and this blog

would provide an insight for the readers to decide for themselves.

fragile but secured peace during and after the Sierra Leone civil war that lasted for ten years. Beginning in

1991 when the rebel group Revolutionary United Front (RUF), with the help of Liberian rebel forces, tried

to overthrow Momoh’s government, the nation began a plunge into political instability, which in turn

affected its economy [6]. The beginning of the war was of not for reasons of political adversary; rather, it

that was rooted back in the 1980s. In 1999, the UN finally intervened to negotiate a peace agreement

between the rebel groups and the government, while at the same time deployed over thousands of

peacekeeping forces into the area to help secure such agreement. 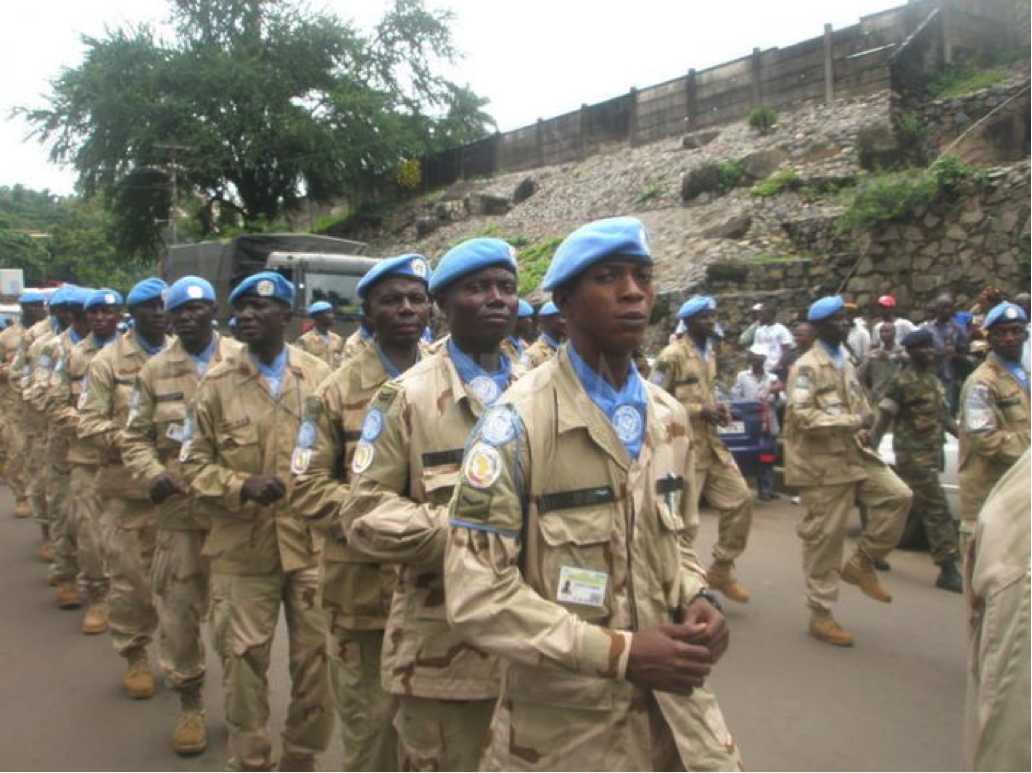 Tensions mount when UN troops were attacked and kidnapped outside the city of Freetown, and the UK

began to intervene. Slowly but successfully, the international community was able to secure peace and

victory to gain majority in the parliament. By 2005 when the UN had completed its mandate, the UN had

reconstructed the nation, set up war crime tribunals, and ensured peace [7]. Although the committee was at

times unforeseen to succeed because of the crisis that arose, the new campaign of mediation launched by the

UN in response allowed tensions to lessen on both sides and negotiations began.

Herzegovina, tens and thousands of refugees fled to nearby country or special enclaves for protection; one of

them being an Eastern city of Srebrenica. The Republic of Sprska was one of such faction, led by General

Ratko Mladic, that fought against the Republic of Bosnia and Herzegovina in effort to secure its self-

proclaimed state for the Serbian government. As the war deteriorated for the Republic of Bosnia and

Herzegovina, UN Peacekeeping Forces were sent in to ensure the safety of the civilians in one of the

enclaves ensured by the forces and the UN as safe from harm. However, the international community knew

the enclave would fall but did nothing about it; and are willing to sacrifice it in efforts to create peace in the

region [4]. Consequently, General Mladic was able to march into town on July of 1995. Mladic and the

forces of the Republic of Srprska (VRS) separated the women, children, the young, and the old from

military-aged men right in front of the eyes of the UN Peacekeeping Forces. 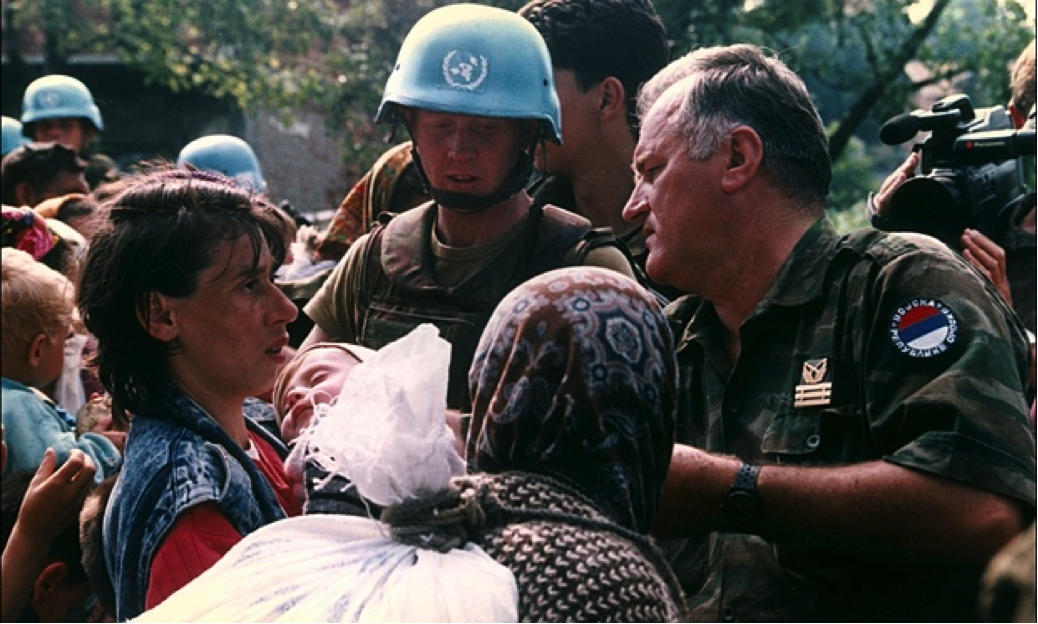 Women, the young, and the old separated by Mladic along with UN Peacekeepers in Srebrenica 1995

8,000 men with ages from 18-55 were massacred on that day, and people that tried to seek shelter at the

Dutch Peacekeeping Headquarters were denied access. All of these actions led to the worldwide questioning

and condemnation of the UN, NATO, and several other Western nations. The Srebrenica Massacre was the

single largest genocide ever recorded since the Third Reich in the Second World-War. It was a result of

hostages in negotiation with the West) [4]. Few months later, the Dayton Agreement was signed as a peace

treaty, in which kept the status quo of the State of Bosnia and Herzegovina, and dividing the state into two

administrating entity: Federal Republic of Bosnia and Herzegovina and the Republic of Srebrenica. The fall

of Srebrenica had damaged the reputation of the UN, and it demonstrated on how different nations’ political

the UN Peacekeepers. Also, at the time of the occupation, there were only 110 Peacekeepers on site,

extremely insignificant compared to the attacking VRS; and revealing the inefficiency of the Security

Council in the reinforcement of UN personnel in the Bosnian Civil War (34,000 were proposed, but it was

combatant nature while on missions, but had a few flaws that included its inadequate number of forces in

certain regions. Some others might argue that it was the conditions and the status quo of the region deployed

of Peacekeepers that allow such mission to be successful, hence the presence or absence of a negotiable

Leone a triumph and Srebrenica a failure. In the self-examining report by the UN on the issue of Srebrenica,

it broke new grounds by condemning the tendency of the organization to remain neutral in a civil conflict.

Besides its neutrality being put into question in compared to its achievement, there had been rising

involvement in conflicts. This is because in many incidents across different peacekeeping missions, the UN

assigned to them. When this happens, the UN Peacekeepers have to choose between allowing or restricting

such action. One example of this is was mentioned above in the Srebrenica Massacre when the Dutch forces,

with their inadequate numbers, were unable to decide whether or not they should maintain their neutrality

and do nothing; or should they fight back against VPS, violating the terms of their charter and the command

from headquarters in doing so. The resulting decision of the former was what brought this tragedy among

the international community. If the power to make decisions on front lines was given to them, the

to. India, one of the largest contributors of UN Peacekeeping Forces, was against such implementation

had dealt with in its 70 years of creation. Referring to all past UN peacekeeping missions, it is obscure for

parties or to preserve peace and security in the region. Some argued that its success was because of the

mindset that both parties had and the situation of which the conflict was placed in, in which created a

with peace agreements and actions). On the other hand, some scholars argued, an equal sign should not be

place on its failures with the actual conflict itself; rather, the presence of such humanitarian-based forces

intervention. Nevertheless, the UN Peacekeeping Forces remain the only organization in world that retain a

military power, and such organization, disregarding its efficiency, is one of the most effective tools in the

maintaining of world peace and security.

3. Henderson, Barney. “What Have Been the Successes and the Failures of UN Peacekeeping

4. Hartmann, Florence and Vulliamy, Ed. “How Britain and the US Decided to Abandon Srebrenica to

5. McGreal, Chris. “What is the Point of Peacekeeping When They Don’t Keep Peace?” The Guardian.