A Guide to UNA-USA ROPs

UNA-USA is a style of MUN that focuses on the competition between different blocs and individuals. It features a general speaker’s list and an agenda that is often, and should be, interrupted by different motions raised by the delegates. Unlike THIMUN procedure, UNA-USA will give out awards for best delegations and other related awards. UNA-USA is also commonly considered to be more fierce and competitive than THIMUN, which in most cases is true because of the difference in rules of procedure and how the conference is run.

In this guide (cheat sheet?), we’ll be going through some of the most important rules & motions of a UNA-USA ROP oriented conference to clarify how they work! 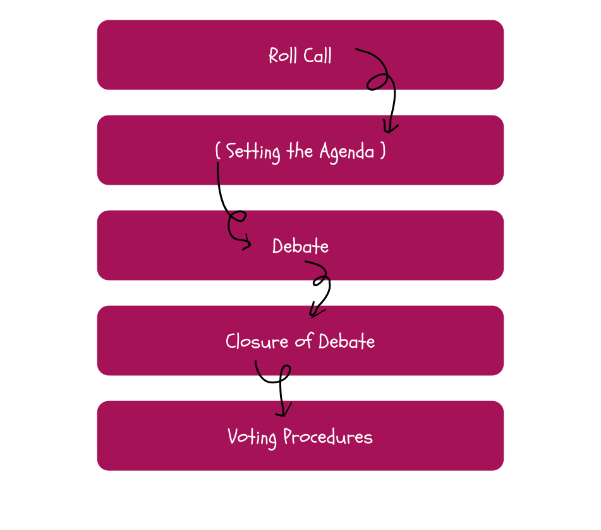 This is a flowchart indicating the flow of debate. We’re putting it here so you get a grasp of the order in which what happens in the conference room:

(*Note that if there is only one topic for each committee, the setting of the agenda will be dismissed)

Every committee session begins with Roll Call. When your delegation’s name is called upon, raise your placard high and say “present” or “present and voting.”

After a delegate finishes his/her speech, the Chair will ask: “Delegate, how would you like to use your remaining time?” Delegates are allowed to:

A motion is a formal proposal raised by a delegate. In the UNA-USA procedure, there are different types of motions that serve different purposes. If you’re not familiar with them, they can seem pretty intimidating. And that’s exactly why we’re here to help! We’ll be introducing some of the most commonly used motions in a conference below:

The Secondary Speakers’ List is in order when a motion for a “Moderated Caucus” passes. During a moderated caucus, a topic is chosen, and all speeches made should comply with that specific topic. The speaking time set for each speaker and the “topic” of the moderated caucus is set by the delegate who raised the motion. It is also very important to keep in mind that there is no time-yielding for the Secondary Speakers’ List.

During an unmoderated caucus, delegates are encouraged to walk around in the conference room to share their thoughts and opinions with other delegates. The time set for a moderated caucus is set by the delegate who raised the motion.

Introducing a Draft Resolution to the Committee

By raising this motion, delegates are informing the Chair that the debate has come to an end and that they are ready to vote on the draft resolutions. Thus, most chairs forbid delegate to raise this motion until the very last session. If this motion passes, the committee will automatically move into voting procedures.

Suspension of the Meeting

To “suspend” is to “temporarily prevent from continuing or being in force or effect.” Thus, a suspension of the meeting would mean to temporarily end the meeting. Delegates are expected to raise this motion at the end of each and every (except the last) session for a lunch break or maybe a doughnut break (you wish).

From asking for permission to go to the restroom to asking a question about the rules of procedure, there are numerous situations in which a delegate would raise a “point.” There are three types of points in general: point of personal privilege, point of order, and point of parliamentary inquiry.

Normally, this point is used to ensure that a delegate’s personal rights are being taken into account. The following are several more common situations in which a delegate would raise a point of personal privilege:

If a delegate is not sure about a certain procedure, he/she may raise this point and ask the Chair about it. Here’s an example: “Point of parliamentary inquiry: What are some ways a delegate may yield his/her remaining time?”

This point is used to indicate an instance of improper parliamentary procedure. Now, unless you’re a veteran of Model UN and know all of the ROPs by heart, we wouldn’t suggest you to raise this because it may seem offensive to your Dais team (you don’t want that!). But anyhow, we’re still going to demonstrate how this point is used: “Point of order. The delegate believes that the Chair should not ask delegates how they would like to yield their time during a moderated caucus.”

Delegates are allowed to raise motions “for a roll call vote” or “to vote by acclamation.” If neither of these motions are raised, the committee will vote with regular voting procedures.

A “roll call vote” simply means to vote by roll call. Delegates are allowed to vote “yes,” “no,” “pass,” or “abstain.” If a delegate votes “pass,” he/she may only vote “yes”/”no” upon the second round.

If a delegate had said “present” during roll call of the last session: allowed to vote “yes,” “no,” or “abstain” on documents.

If a delegate had said “present and voting” during roll call of the last session: allowed to only vote “yes” or “no” on documents.

Voting by acclamation simply means “to vote by clapping.” This motion is normally raised when there is only only dominant bloc in the committee room and that bloc is sure that no one will oppose its draft resolution. Thus if no one objects this motion and everyone claps when voting, the draft resolution passes.

To vote by show of hands.

An non-substantial amendment is used to amend mistakes regarding grammar and spelling, and can be applied to both preambulatory and operative clauses

It will be announced by the Chair after he/she approves it.

It will be introduced to the floor if they meet the above criteria, then will be debated and voted on by the committee*. If it passes, the amendment will be incorporated into the draft resolution that is being amended

(*** Delegates must raise a motion to “introduce unfriendly amendments.” If the motion passes, a secondary speakers’ list will automatically be established. When delegates are ready to vote on the amendment, they must motion for a “closure of the debate.” This will directly lead to voting procedures for this amendment.)