The United Nations employs a number of organs and bodies under its jurisdiction in order to carry out its various, diversified duties. The complete structure can be a little intimidating, as seen in the table drawn by the United Nations Department of Public Information in 2013: 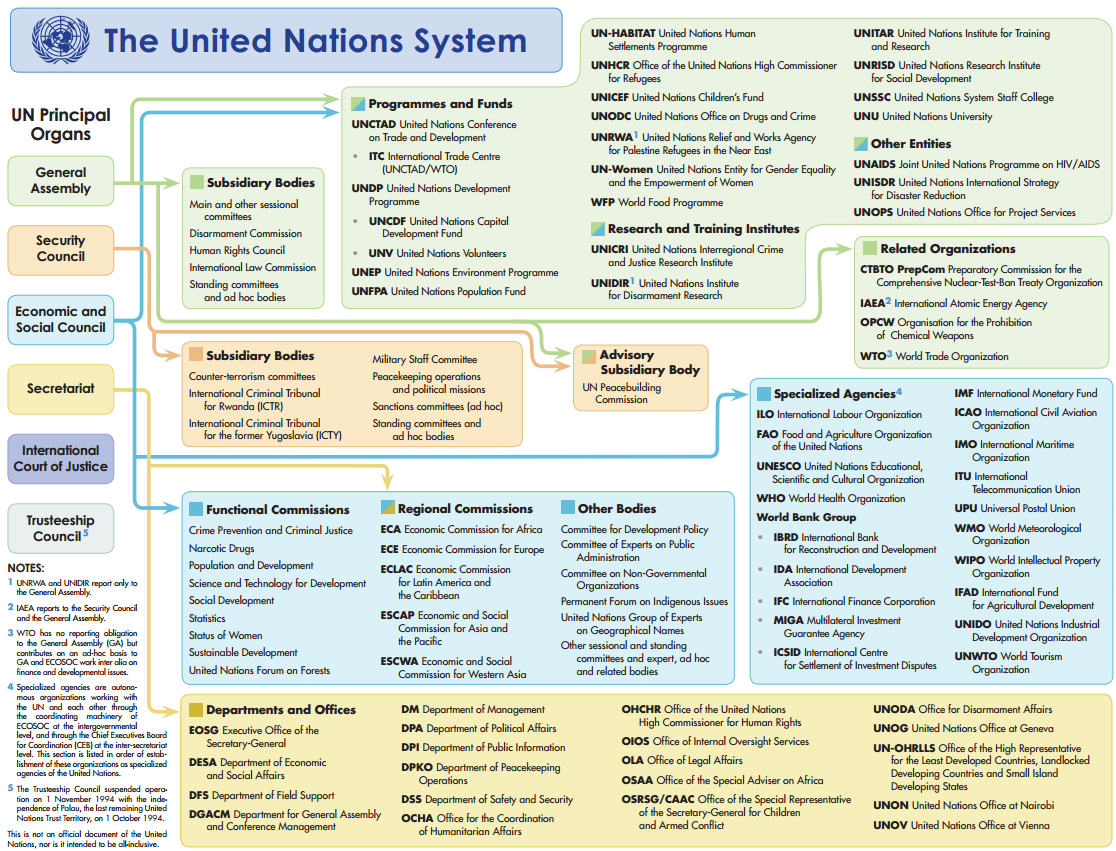 Fortunately, not even the strictest of MUN directors will expect you to memorize every name and acronym under the United Nations. Yet, it is within expectation and beneficial to know the goals and powers of the principal organs and commonly-referred-to bodies. Hopefully, this guide will give you a basic understanding of them.

The General Assembly (GA) is the main deliberative, policymaking and representative organ of the UN. All 193 Member States of the UN are represented in the General Assembly, making it the only UN body with universal representation. It is also split into six main committees, which can be referred to either by name or number.

On a number of agenda items, however, such as the question of Palestine and the situation in the Middle East, the Assembly acts directly in its plenary meetings.

It is important to note that while the Assembly is empowered to make only non-binding recommendations to States on international issues within its competence, it has, nonetheless, initiated actions—political, economic, humanitarian, social and legal—which have affected the lives of millions of people throughout the world.

Several notable bodies and agencies under the General Assembly that are often used in high school Model United Nations conferences include the following:

focus: long-term humanitarian and development assistance to children and mothers

The Security Council is primary responsible for the maintenance of international peace and security.  It has 15 Members (5 permanent and 10 non-permanent members). Under the U.N. Charter, all Member States are obligated to comply with Council decisions. The Security Council takes the lead in determining the existence of a threat to the peace or act of aggression. It calls upon the parties to a dispute to settle it by peaceful means and recommends methods of adjustment or terms of settlement. In some cases, the Security Council can resort to imposing sanctions or even authorize the use of force to maintain or restore international peace and security.

This council is the principal body for coordination, policy review, policy dialogue and recommendations on economic, social and environmental issues,  just as its name indicates.  It has 54 members, which are elected by the General Assembly for overlapping three-year terms. It is the United Nations’ central platform for reflection, debate, and innovative thinking on sustainable development.

Several notable bodies and agencies under the General Assembly that are often used in high school Model United Nations conferences include the following:

International Court of Justice (ICJ), seated at the Peace Palace in the Hague, is the only one of the six principal organs of the United Nations not located in New York. The Court’s role is to settle, in accordance with international law, legal disputes submitted to it by member states and to give advisory opinions on legal questions referred to it by other United Nations organs and specialized agencies. In the past, the ICJ has settles prominent issues such as the Kosovo’s declaration of independence (2010), Maritime delimitation in the Black Sea (2009), and the temple of Preah Vihear (1962).